Saturday night, May 25th, I’ll be appearing live with George Noory at the River Rock casino in Vancouver, BC (actually Richmond, BC). I’ll also be there with Dr. John Gray “Men are From Mars Women are from Venus”, and economist financial adviser Catherine Austin Fritts. The VIP meet and greet begins at 4:30 PM PST with the three hour show starting at 7:00 PM PST. There will be another meet and greet after the show. We will be glad to sign our books or any other object you wish. There will also be a photographer present. This is my first trip to Vancouver and I’m looking forward to meeting my Pacific North West friends. You spend the nights with already on Coast to Coast so you may as well hang out with us live. I understand you can order tickets from Ticketmaster in Canada. Check their site at www.riverrock.com/​entertainment. I hope to see lots of you there!

Sunday night, December 6, 2009, I’ll be a guest on the Richard Syrett Show starting at 11:00 PM EST. You can listen in at this link http:/​/​www.richardsyrett.com/​. Also check out Richard’s upcoming television series on You Tube. Check out his promo here http:/​/​www.youtube.com/​watch?v=mVEJFATKoXI..

Tuesday night December 8, 2009, I’ll be back on Coast to Coast with a John Lennon special.

Tonight, August 30, 2009, I’ll be a guest on the Darkerside Radio. This shows sounds right down my alley! The show begins at 7:00 PM EST. You can listen in at the following link.

I’ll be on Coast to Coast with Ian Saturday night August 1st. Listen in.
Monday Morning, May 25, 2009, at 9:00 AM EST I’ll be a guest with Howard Hughes and City Talk from Liverpool. I love the UK and what a wonderful city!
Howard Hughes fills in for Dean Sullivan on his mid afternoon talk slot at Liverpool’s Citytalk 105.9 (see www.citytalk.fm) …The show reflects news and entertainment in one of the most vibrant cities on the planet. It is heard across the north of England and into North Wales… The show airs daily from 1300 – 1600 Mon-Fri. Liverpool was European Capital of Culture in 2008 and the city is now thriving, exciting and ultra-modern – imagine a mix of New York and Barcelona and you have it!!

In hour one of Monday’s show Howard will be talking with Robin Gardiner – author of a spine-chilling new book on the Titanic disaster. Hour two features American rock ‘n’ roll man R Gary Paterson – we revel in the myths and legends of music from Buddy Holly to Jim Morrison to Bolan and Lennon. And if you’re wondering what’s in hour three you’ll have to tune in and find out – the show’s so fresh we’re still workin’ on it !!

(Dean Sullivan made his name as Jimmy Corkhill – the biggest character on British tv soap “Brookside” that ran from the 80s until a few years ago… Howard Hughes is a multi award winning news broadcaster and founder of on-air and online talk show “The Unexplained” see www.theunexplained.tv )

Tonight, January 30, 2009, I’ll be back on Coast to Coast remembering “The Day the Music Died” on its upcoming 50th anniversary. Our guests will be Peggy Sue Gerron, Donna Ludwig Fox, and the Big Bopper, Jr. This will be a can’t miss show!
January 8, 2009, I’ll be celebrating Elvis’ birthday on Coast to Coast. I’ll be on with George, Cory Cooper and Patrick Lacy. Hopefully, we’ll get all the information we will need on the Elvis is Alive Conspiracy rumors.
“Doomed to Die: 13 Curses” will air again on January 7, 2008, at 4:00 PM EST.
Tonight, December 21, 2008, I’ll be a guest with my friends on Shadow Talk Paranormal Radio. The show starts at 7:00 PM EST and you can listen live and interact with the show at http:/​/​shadowtalkparanormalradio.com/​
This Friday, December 19, 2008, I’ll be on the Mancow Show. If you are an early riser listen for me at 7:50 AM (EST).
E! Channel’s “Doomed to Die: 13 Curses” will air again on December 16th, 2008 at 1:00 PM EST>
I’ll be on the Richard Syrett Show tonight live from Toronto,December 5, 2008, from 10:00 PM EST until 11:30 PM EST. As always you can listen in at www.richardsyrett.com. Tonight’s topic deals with John Lennon.
I have two videos on sling.com. One video is on backward tracks while the other has to do with songs banned in the USA. To access the videos go to wwww.sling.com. If you have to register it is FREE! Then go to channels and click on MQM. You should then be able to see the list of programming MQM provides. Then just click on the link and enjoy the show.

Sunday night, October 19th I’ll be back on The Alan Handleman Show. You can listen in at www.ifitrocks.com

On the night of October 15th I’ll be a guest on “The Richard Syrett Show in Toronto, Canada. Listen in at www.richardsyrett.com as we discuss the 13 greatest curses in the entertainment industry.

The night of July 30, 2008, I’ll be a guest on Shadow talk Radio Paranormal Radio (www.shadowtalkparanormalradio.com) The program begins at 7:00 PM EST.

April 10, 2008, I’ll be a guest on the Richard Syrett Show from Toronto, Canada. Peggy Sue Gerron will also be a guest with me. You can listen to the show and call in from the following link http:/​/​www.richardsyrett.com/​index.htm

Thursday night, January 24th, 2008, I’ll be on Coast to Coast AM with Robby Kreiger and Ray Manzarek of The Doors and currently “Riders on The Storm.” Here’s your chance to speak to two legendary members of one of America’s greatest bands! We will discuss the band’s history as well as the myths and legends surrounding a certain Mr. James Douglas Morrison.

This Saturday night, December 22, 2007, I’ll be on Coast to Coast with Ian Punnet and my friend Bill Harry. Bill was the creator of Mersey Beat magazine and an architect of the British Invasion. He was one of John Lennon’s best friends and is close to Ringo and Sir Paul as well. We’ll discuss rumors of John contacting psychics from the afterlife and his recollections as serving as a publicist for Led Zeppelin and Pink Floyd. I hope to hear from you!
Friday night, April 6, 2007, I’ll be appearing on Coast to Coast for the first hour with George and my friends Peggy Sue Gerron (the original rock goddess immortalized by Buddy Holley)and Jay P. Richardson (The Big Bopper, Jr). We will address many of the myths and legends surrounding Buddy and the Big Bopper. You don’t want to miss this show.
I’ve just completed a question and answer interview with Lex for an upcoming Coast to Coast “After Dark” newsletter.
My new title, “Take a Walk on the Darkside: Rock and Roll Myths, Legends, and Curses,” has now been released by Simon and Schuster’s Fireside Books and is in bookstores everywhere. This work is everything I wanted “Hellhounds on Their Trail” to be. All the popular stories from “Hellhounds” are included as well as some interesting new material in this updated and complete version. The good news is the retail price will be $14.00, a far cry from the “collector” prices offered for “Hellhounds on Their Trail!” Good things come to those who wait and I’m pleased that Fireside Books was able to offer this expanded version for this price. Thank you for your patience and I’m sure you will enjoy these tales from the rock and roll graveyard!

A little too commercial for a meeting place with “Old Scratch?” photo copyright by Grady Irby (used by permission) 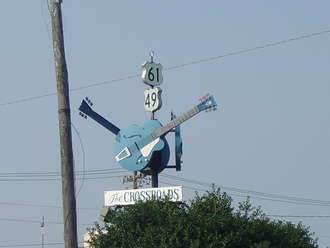 Close up of the Crossroads inside Clarksdale, Mississippi. Photo copyright by Grady Irby (used by permission)

Here you see an upclose image of the famous crossroads of Hwy 61 and Hwy 49 located inside Clarksdale, Mississippi.

Here is another location said to be the Robert Johnson crossroads

This location is where Jonestown road crosses Hwy 61 and is the route taken to Friar’s Point where Charley Patton, Son House, and Robert Johnson went to play. I believe, as well as many others, that this could be the actual crossroads of the myth. copyright photograph by Grady Irby (used by permission).

An old oak tree setting close to the crossroads north of town. (photograph copyright by Grady Irby. Used by permission).

Perhaps a young Robert Johnson sat nervously under this very oak tree and waited to make his pact. 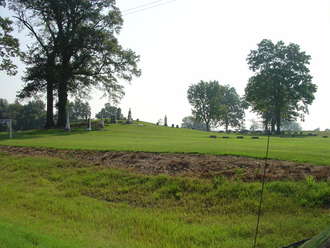 An old cemetery north of Clarksdale just off the crossroads of HWy 61 and Jonestown road. Robert Johnson was said to have practiced the guitar at night in cemeteries. (photgraph copyrighted by Grady Irby. Used by Permission).

This location became a cemetery in 1850 so Robert Johnson knew of its location. It was also at this location that a friend and I brought back some “dirt” from the crossroads that some of my friends said brought them terrible luck. There was also a huge black snake coiled around the base of one tombstone. A fitting prop for my journey; however, that is a story for my next book. By the way, I still have a glass bottle of the dirt setting on my desk.

Cotton fields of the old Leatherman Plantation where Robert Johnson grew up near Robinsonville, Mississippi. (copyright by Grady Irby. Used by permission).

Johnson’s house was located just to the right of the water tank next to the levee to the rear of the cotton fields.